13 African Dog Breeds You Have To See

As you probably know by now, there are a number of dog breeds that come in all shapes and sizes.

Dogs come from all around the globe, and today we are going to look at some dog breeds that originate from Africa.

Most people, when they think of Africa, will probably think of lions, giraffes, and elephants, but there are a surprisingly large number of dogs that come from this beautiful continent.

These dogs are fairly small, only getting around 11–13 inches tall and weighing less than 13 pounds when full-grown.

Although they don’t have a lot of hair, that doesn’t mean they need a lot of grooming. These dogs are prone to allergies, skin irritations, and sunburns, so make sure they are properly groomed. 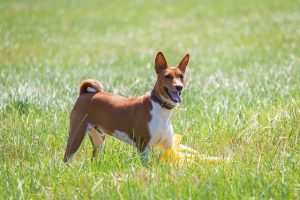 The Basenji is a smaller dog, typically weighing around 22–24 pounds and standing at around 16–17 inches in height.

These dogs are quite active and need plenty of exercise so they don’t get bored. Keep in mind that these dogs cannot be trusted off-leash as they have a strong instinct to hunt.

Basenjis are actually known to yodel, unlike other dogs. These yodels sound like a mixture of a tornado siren and a howl. 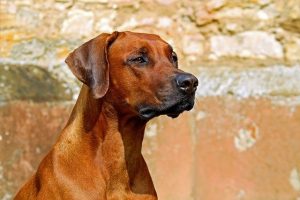 The Rhodesian Ridgeback, named after the stripe (or ridge) of hair that grows backward across their backs, is a strong, athletic dog.

Because of this, Rhodesian Ridgebacks should have plenty of exercise so they will stay fit and healthy.

Males are usually about 25–27 inches tall, while females are slightly smaller, coming in at around 24–26 inches tall.

These dogs only need the occasional bath and brushing and generally don’t shed much, but that doesn’t mean they are hypoallergenic.

Also, make sure that these dogs receive plenty of attention. They don’t like to be ignored!

The Boerboel is a strong, athletic dog breed that originates from South Africa and was bred by Dutch settlers. It is believed that the Borboel is a crossbreed between the Dutch Mastiff and the native African dog.

Although these dogs are considered family dogs, they can still be over-aggressive.

Please note that these dogs can weigh up to 200 pounds and shouldn’t be messed with. 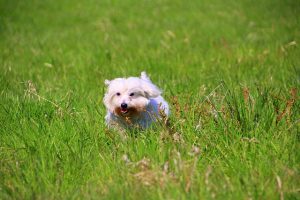 Although it has a French name, Coton de Tuléar, named after the city of Tuléar, actually originates from Madagascar.

This white, African dog breed ispretty small, only getting around 9–11 inches tall and weighing 8–15 pounds.

These dogs typically live for 14–16 years, but some claim that they can even live as long as 19.

Cotons are quite active and should have regular exercise so they stay fit and won’t become bored.

These dogs should be bathed and brushed regularly, have their nails clipped and have their teeth brushed often. 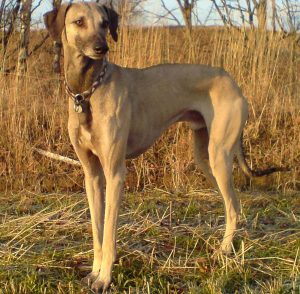 The Sloughi is a taller dog breed, measuring around 29 inches, but only weighing around 35-50 pounds.

They are generally healthy, but good breeders should look out for progressive retinal atrophy.

Thanks to their short hair, these dogs don’t need to be brushed or bathed that often, but their ears should still be checked regularly and their teeth brushed daily. 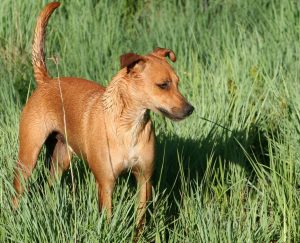 The Africanis is a larger dog breed, weighing around 55–100 pounds and measuring 24 inches when full-grown.

Originating from South Africa, these dogs were bred to help their human companions hunt.

Thanks to their short hair, these dogs only need to be bathed and brushed occasionally, but their teeth should still be brushed and their nails trimmed when needed. 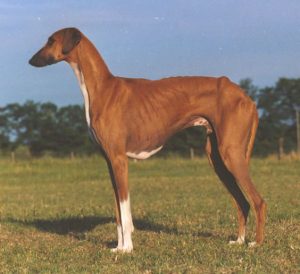 The Azawakh, originating from West Africa, is around 23-29 inches tall and weighs 33-55 pounds when full-grown.

Thanks to their shorter coats, these dogs need to be brushed and bathed only on occasion. Azawakhs should have regular exercise to stay fit and healthy.

No one really knows where they originate from, but some believe they are from the Atlas Mountains in North Africa.

These dogs are around 20–24 inches tall and weigh 50–55 pounds when they’re full-grown.

They need daily brushes, weekly baths, and because of how energetic these dogs are, they will also need to exercise regularly.

Some health issues you should look out for are hip and elbow dysplasia, as well as patellar luxation. Aidis can also have eye issues. 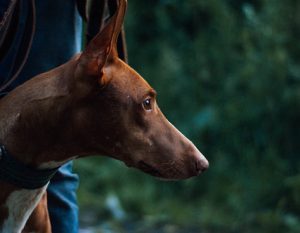 The Pharaoh Hound is an Egyptian dog breed that gets around 21–25 inches tall and weighs around 45–55 pounds when they’re full grown.

Pharaoh Hounds are quick to learn, yet owners may find that their Pharaoh Hound won’t follow their orders when they are unleashed. Unfortunately, this is quite common. 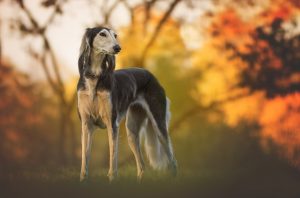 The Saluki is another tall, yet skinny dog breed. Males get around 28 inches tall but only weigh 40–65 pounds. Females are a bit smaller.

There are two types of coats: feathered and small, but they are both fairly easy to groom. All they need is weekly brushing and occasional baths.

The Greyhound, not to be confused with the Italian Greyhound, is a tall, lean dog, getting up to 30 inches tall and weighing 60-70 pounds.

They are considered the cheetahs of the dog world as they are quite energetic and run pretty fast.

Thanks to their shorter coat, they only need to be bathed and brushed on occasion. The nails should be trimmed when necessary, and the ears should be checked regularly.

The Armant, an Egyptian dog breed, originates from the village of Armant and is believed to be a 200 years old dog breed.

Also known as the Egyptian sheepdog, the Armant is around 21–23 inches tall and weighs 50–60 pounds when it is full-grown.

These dogs should be fed high-quality dog food that’s high in calories and fat, as they are quite energetic and need the extra nutrients.

As you can see, there are many African dog breeds has many dog breeds that come in all shapes and sizes. All of them are domestic dogs, so you can own an African dog yourself.

Remember, however, that you shouldn’t get an African wild dog. These dogs are typically illegal in the U.S., but they are generally hard to come by.

Spain is an ancient country, known for its cities like Barcelona and…

Dogs
18 Beautiful White Dog Breeds You Must See (With Pictures!)

White is typically the color that stands for holiness, purity, and all…